Psilocybe  is a genus of gilled mushrooms, growing worldwide, in the family Hymenogastraceae. Most or nearly all species contain the psychedelic compounds Psilocybin, psilocin and baeocystin 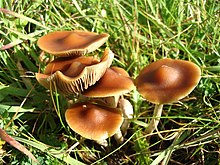 Psilocybe fruit bodies are typically small, nondescript mushrooms with a typical “little brown mushroom” morphology. Macroscopically, they are characterized by their small to occasionally medium size, brown to yellow-brown coloration, with a typically hygrophanous cap, and a spore print-color that ranges from lilac-brown to dark purple-brown (though rusty-brown colored varieties are known in at least one species). Hallucinogenic species typically have a blue-staining reaction when the fruit body is bruised. Microscopically, they are characterized by pileipellis with hyphae that run parallel to the pileus surface, forming a cutis, by their lack of chrysocystidia, and by spores that are smooth, ellipsoid to rhomboid to subhexagonal in shape, with a distinct apical germ pore. Ecologically, all species of Psilocybe are saprotrophs, growing on various kinds of decaying organic matter. Buy magic mushroom spore syringes …

The medicinal uses of the Psilocybe was recorded by Native Americans of Central America. Shamans, or curanderas would avidly ingest the “sacred mushrooms” for the extrasensory perceptual effects it gave them in order to better assess problems faced in their society. The observed effects of the alkaloids found in these mushrooms has given rise to research into their possible uses for psychiatric medicine. For details on contemporary research, see: Psilocybin: Medical research. 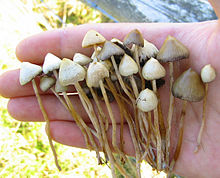